Not going to be defeated!!

Earlier in the summer when I was blasting up and down seams to make scrubs for the NHS I fell out with my sewing machine. For months I have not been able to get a decent stitch going. It is barely 5 years old and very, very expensive and to repair the "looking at" fee was £100. But a couple of days ago I brought it to the kitchen table, got out the instructions and turned on some smoothing classical music and was determined to sort it out. 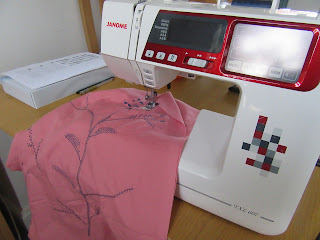 I won!!! After a couple of hours of re setting, changing needles, re winding bobbins it settled down to a decent stitch. I then tried out all of its embroidery special functions. 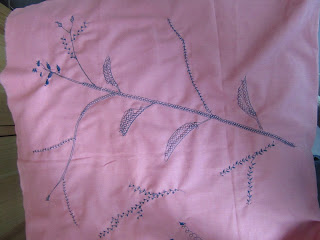 I have set myself a project to learn applique. Never really done much of this but I have the fabrics and thread and have worked through all the stitch menu settings now. Changing width and intensity, using special applique "blanket stitch" and ordinary but tight zig zag. My project is to put some flowers on a very boring beige door curtain that keeps out the draft from the front door.

The other day I posted about the daft adverts we see in the pandemic. I could not believe the next one that caught my attention. Ryan Air.  "Jab and Go". Get a covid jab and go on holiday!!!!!!!!!!!!!! Jump in a crowded swimming pool!!!!!!!!!!! This was hours after the UK Government briefing when the chief scientist said we would still be doing lockdowns NEXT winter and all the other gloom and doom. I was incensed. I complained the the ASA (Advertising Standards Authority) and had an email today to say my complaint was added to thousands of others.

To ward of lockdown inactivity my son in south London has adopted an old dog from Battersea Dogs Home. They wanted one for ages but were unsure if a puppy was their thing. Our grandson is a lively enough thing!!  The dog was abandoned outside the gates of the Dogs Home and it did have some health issues which have been cured now. Apparently it had been in BDH before. Poor thing has been unlucky. They have been told it may only have 2 years and not be that lively, but they are determined to give it a good, warm home and I am delighted they will get out walking more (even at a stately slow pace) as they have been working from home since March and miss their daily walks to catch trains into the city of London.